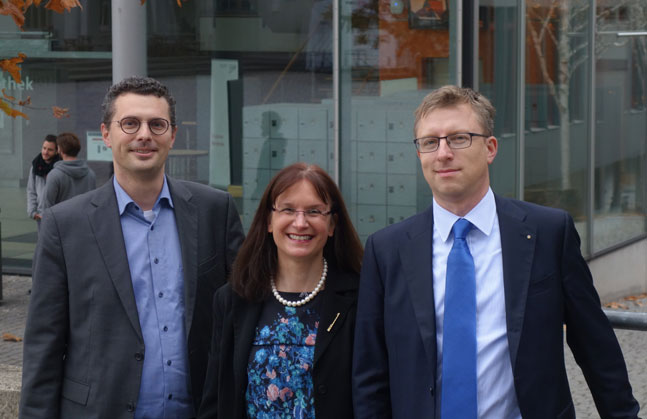 Pforzheim/Kehl – It’s still just a simple Excel spreadsheet with formulas, but in future, this piece of legal tech could make decision-making easier for businesses. Today, at the Pforzheim University of Applied Sciences, a tool was presented that answers the question of whether it is worth resolving a dispute between a business and its clients at a consumer arbitration board. The decision-making tool was developed by Stuttgart entrepreneur Dr Wolfgang Dannhorn in collaboration with Dr Simone Harriehausen (professor of business law at the Pforzheim University of Applied Sciences), who contributed to the idea with her experience as a business mediator and former lawyer and judge.

There is huge demand for this kind of tool, as Felix Braun, chair of the Zentrum für Schlichtung e.V. arbitration centre, knows all too well: ‘Since the legal obligations from Articles 36 and 37 of the German Act on Alternative Dispute Resolution in Consumer Matters came into force, many businesses have been faced with the issue of arbitration for the first time. That’s why we believe that providing information on the process and its benefits and drawbacks is in many people’s interests. However, there are still lots of misconceptions out there.’ Arbitration proceedings could enable a full review of the legal situation by a neutral third party at moderate costs, boosting customer confidence in the long term.

To raise awareness among businesses, Braun and his team also regularly give talks and webinars at entrepreneurial initiatives, industry associations and chambers across Germany.

The Allgemeine Verbraucherschlichtungsstelle, a general arbitration board based at the Zentrum für Schlichtung e.V., is an institution recognised by the German Act on Alternative Dispute Resolution in Consumer Matters. It comes into play if there is no specific board available to consumers, such as for a particular industry. This is still the case for many sectors.

The proceedings that take place there are not just negotiations of goodwill recommendations, and the arbitrators don’t just represent the one-sided interests of one party. Instead, once the parties have exchanged their views, the objective legal situation is assessed, and a suggested solution is presented, which can then be accepted or rejected. The company bears the costs of the proceedings at the Allgemeine Verbraucherschlichtungsstelle arbitration board.

In light of this distribution of costs, many companies fear receiving floods of requests. ‘Our experience from the past few years, however, shows that there have been none of these feared waves of applications pushing businesses into unpredictable cost explosions,’ stresses Braun. The experience of a North Rhine-Westphalia-based company with two million end customers is, by contrast, more typical: referral to the arbitration board in June 2016 has so far led to only four fee-based arbitration proceedings. Tools like the one being showcased are an excellent way not only to quell this concern, but also to show companies that arbitration can pay off from a purely financial standpoint.